Circa 2006, the consensus on Firefox was concisely stated by this classic xkcd: 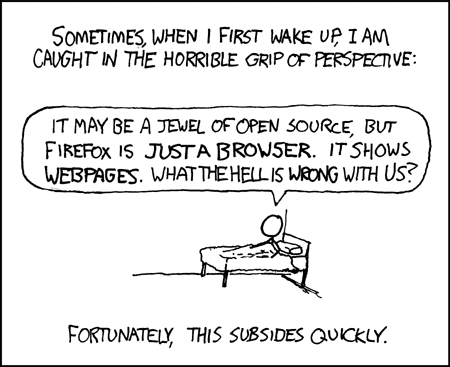 This feeling didn’t last. In 2016, I wrote In Memoriam - Mozilla, and in 2017, Firefox is on a slippery slope. Well, I was right, and Firefox (and Mozilla) have only become worse since. The fuck-up culture is so ingrained in Mozilla in 2020 that it’s hard to see it ever getting better again.

In the time since my last article on the subject, Mozilla has:

The most interesting things they’ve been involved in in the past few years are Rust and Servo, and they fired most or all of their engineers involved in both. And, yesterday, Mozilla published a statement siding with Google on anti-trust, failing to disclose the fact that Google pays to keep their lights on.

Is this the jewel of open source? No, not anymore. Firefox is the embarrassment of open source, and it’s the only thing standing between Google and an all-encompassing monopoly over the web. Mozilla has divested from Firefox and started funnelling what money is left out of their engineering payroll and into their executive pockets. The web is dead, and its fetid corpse persists only as the layer of goop that Google scrapes between its servers and your screen. Anyone who still believes that Mozilla will save the web is a fool.

As I have stated before, the scope of web browsers has been increasing at a reckless pace for years, to the point where it’s literally impossible to build a new web browser. We have no recourse left to preserve the web. This is why I’m throwing my weight behind Gemini, a new protocol which is much simpler than the web, and which you can implement yourself in a weekend.

Forget about the web, it’s a lost cause. Let’s move on.