After a few busy and stressful months, I decided to set aside October to rest. Of course, for me, rest does not mean a cessation of programming, but rather a shift in priorities towards more fun and experimental projects. Consequently, it has been a great month for Helios!

Hare upstream has enjoyed some minor improvements, such as from Pierre Curto’s patch to support parsing IPv6 addresses with a port (e.g. “[::1]:80”) and Kirill Primak’s improvements to the UTF-8 decoder. On the whole, improvements have been conservative. However, queued up for integration once qbe upstream support is merged is support for @threadlocal variables, which are useful for Helios and for ABI compatibility with C. I also drafted up a proof-of-concept for @inline functions, but it still needs work.

Now for the main event: Helios. The large-scale redesign and refactoring I mentioned in the previous status update is essentially complete, and the kernel reached (and exceeded) feature parity with the previous status quo. Since Helios has been my primary focus for the past couple of weeks, I have a lot of news to share about it.

First, I got back into userspace a few days after the last status update, and shortly thereafter implemented a new scheduler. I then began to rework the userspace API (uapi) in the kernel, which differs substantially from its prior incarnation. The kernel object implementations present themselves as a library for kernel use, and the new uapi module handles all interactions with this module from userspace, providing a nice separation of concerns. The uapi module handles more than syscalls now — it also implements send/recv for kernel objects, for instance. As of a few days ago, uapi also supports delivering faults to userspace supervisor processes:

The new userspace threading API is much improved over the hack job in the earlier design. It supports TLS and many typical threading operations, such as join and detach. This API exists mainly for testing the kernel via Vulcan, and is not anticipated to see much use beyond this (though I will implement pthreads for the POSIX C environment at some point). For more details, see this blog post. Alongside this and other userspace libraries, Vulcan has been fleshed out into a kernel test suite once again, which I have been frequently testing on real hardware: 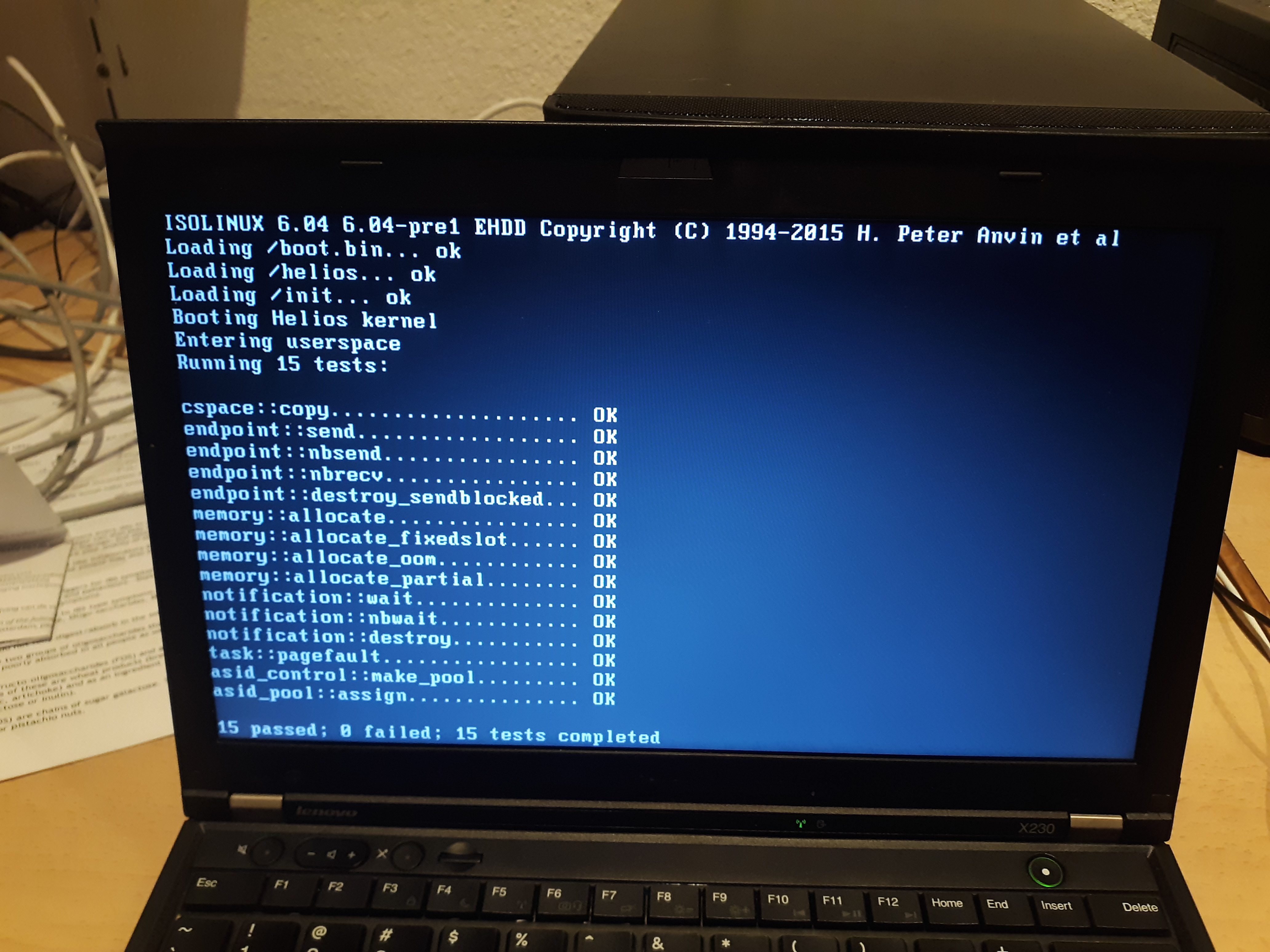 Here’s an ISO you can boot on your own x86_64 hardware to see if it works for you, too. If you have problems, take a picture of the issue, boot Linux and email me said picture, the output of lscpu, and any other details you deem relevant.

The kernel now supports automatic capability address allocation, which is a marked improvement over seL4. The new physical page allocator is also much improved, as it supports allocation and freeing and can either allocate pages sparsely or continuously depending on the need. Mapping these pages in userspace was also much improved, with a better design of the userspace virtual memory map and a better heap, complete with a (partial) implementation of mmap.

I have also broken ground on the next component of the OS, Mercury, which provides a more complete userspace environment for writing drivers. It has a simple tar-based initramfs based on Hare’s format::tar implementation, which I wrote in June for this purpose. It can load ELF files from this tarball into new processes, and implements some extensions that are useful for driver loading. Consequently, the first Mercury driver is up and running:

This driver includes a simple driver manifest, which is embedded into its ELF file and processed by the driver loader to declaratively specify the capabilities it needs:

The driver loader prepares capabilities for the COM1 and COM2 I/O ports, as well as IRQ handlers for IRQ 3 and 4, based on this manifest, then loads them into the capability table for the driver process. The driver is sandboxed very effectively by this: it can only use these capabilities. It cannot allocate memory, modify its address space, or even destroy any of these capabilities. If a bad actor was on the other end of the serial port and exploited a bug, the worst thing it could do is crash the serial driver, which would then be rebooted by the supervisor. On Linux and other monolithic kernels like it, exploiting the serial driver compromises the entire operating system.

The resulting serial driver implementation is pretty small and straightforward, if you’d like to have a look.

This manifest format will be expanded in the future for additional kinds of drivers, such as with details specific to each bus (i.e. PCI vendor information or USB details), and will also have details for device trees when RISC-V and ARM support (the former is already underway) are brought upstream.

Next steps are to implement an I/O abstraction on top of IPC endpoints, which first requires call & reply support — the latter was implemented last night and requires additional testing. Following this, I plan on writing a getty-equivalent which utilizes this serial driver, and a future VGA terminal driver, to provide an environment in which a shell can be run. Then I’ll implement a ramfs to host commands for the shell to run, and we’ll really be cookin' at that point. Disk drivers and filesystem drivers will be next.

That’s all for now. Quite a lot of progress! I’ll see you next time.

NLnet funding comes to an end

Sourcehut was selected for an NLnet grant in January of this year. NLnet Foundation is a Dutch organization which funds many projects to promote an open and secure internet. The typical NLnet grant is structured by milestones. At the beginning of the grant, a…

Hi all! Last Friday we’ve shipped wlroots 0.16! This long-overdue release is the fruit of 10 months worth of work from 46 contributors. It includes many improvements, especially around new protocol support, the scene-graph API and the Vulkan renderer. See the…