One of the goals for the Hare programming language is to be able to write kernels, such as my Helios project. Kernels are complex beasts which exist in a somewhat unique problem space and have constraints that many userspace programs are not accustomed to. To illustrate this, I’m going to highlight a scenario where Hare’s low-level types and manual memory management approach shines to enable a difficult use-case.

Helios is a micro-kernel. During system initialization, its job is to load the initial task into memory, prepare the initial set of kernel objects for its use, provide it with information about the system, then jump to userspace and fuck off until someone needs it again. I’m going to focus on the “providing information” step here.

The information the kernel needs to provide includes details about the capabilities that init has access to (such as working with I/O ports), information about system memory, the address of the framebuffer, and so on. This information is provided to init in the bootinfo structure, which is mapped into its address space, and passed to init via a register which points to this structure.1

Parts of this structure are static (such as the capability number ranges for each capability assigned to init), and others are dynamic - such as structures describing the memory layout (N items where N is the number of memory regions), or the kernel command line. But, we’re in a kernel – dynamically allocating data is not so straightforward, especially for units smaller than a page!2 Moreover, the data structures allocated here need to be visible to userspace, and kernel memory is typically not available to userspace. A further complication is the three different address spaces we’re working with here: a bootinfo object has a physical memory address, a kernel address, and a userspace address — three addresses to refer to a single object in different contexts.

Here’s an example of what the code shown in this article is going to produce: 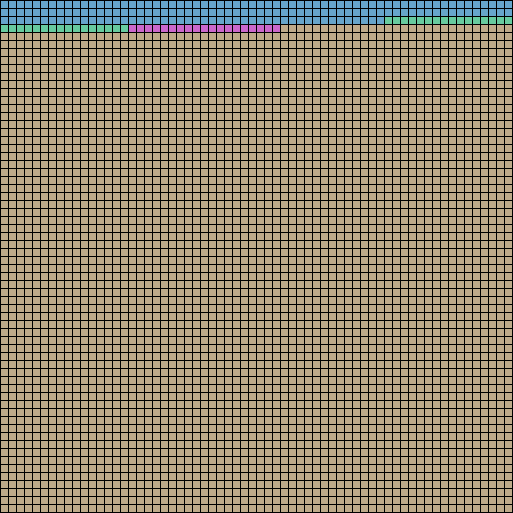 After this, in purple, is the kernel command line. These three structures are always consistently allocated for any boot configuration, so the code which sets up the bootinfo page (the code we’re going to read now) always provisions them. Following these three items is a large area of free space (indicated in brown) which will be used to populate further dynamically allocated bootinfo structures, such as descriptions of physical memory regions.

The code to set this up is bootinfo_init, which is responsible for allocating a suitable page, filling in the bootinfo structure, and preparing a vector to dynamically allocate additional data on this page. It also sets up the arch bootinfo and argv, so the page looks like this diagram when the function returns. And here it is, in its full glory:

The first three lines are fairly straightforward. Helios uses capability-based security, similar in design to seL4. All kernel objects — such as pages of physical memory — are utilized through the capability system. The first two lines set aside a slot to store the page capability in, then allocate a page using that slot. The next two lines grab the page’s physical address and use mem::phys_tokernel to convert it to an address in the kernel’s virtual address space, so that the kernel can write data to this page.

The next two lines are where it starts to get a little bit interesting:

This casts the “info” variable (of type *bootinfo) to a pointer to an unbounded array of bytes (*[*]u8). This is a little bit dangerous! Hare’s arrays are bounds tested by default and using an unbounded type disables this safety feature. We want to get a bounded slice again soon, which is what the first slicing operator here does: [bisz..arch::PAGESIZE]. This obtains a bounded slice of bytes which starts from the end of the bootinfo structure and continues to the end of the page.

The last expression, another slicing expression, is a little bit unusual. A slice type in Hare has the following internal representation:

When you slice an unbounded array, you get a slice whose length and capacity fields are equal to the length of the slicing operation, in this case arch::PAGESIZE - bisz. But when you slice a bounded slice, the length field takes on the length of the slicing expression but the capacity field is calculated from the original slice. So by slicing our new bounded slice to the 0th index ([..0]), we obtain the following slice:

In plain English, this is a slice whose base address is the address following the bootinfo structure and whose capacity is the remainder of the free space on its page, with a length of zero. This is something we can use static append with!3

In Hare, slices can be dynamically grown and shrunk using the append, insert, and delete keywords. This is pretty useful, but not applicable for our kernel — remember, no dynamic memory allocation. Attempting to use append in Helios would cause a linking error because the necessary runtime code is absent from the kernel’s Hare runtime. However, you can also statically append to a slice, as shown here. So long as the slice has a sufficient capacity to store the appended data, a static append or insert will succeed. If not, an assertion is thrown at runtime, much like a normal bounds test.

This function makes good use of it to dynamically allocate memory from the bootinfo page. Given a desired size and alignment, it statically appends a suitable number of zeroes to the page, takes a slice of the new data, and returns both that slice (in the kernel’s address space) and the address that data will have in the user address space. If we return to the earlier function, we can see how this is used to allocate space for the arch_bootinfo structure:

The “ctx” variable is used by the kernel to keep track of its state while setting up the init task, and we stash the kernel’s pointer to this data structure in there, and the user’s pointer in the bootinfo structure itself.

This is also used to place argv into the bootinfo page:

Here we allocate a vector whose length is the length of the argument string, with an alignment of one, and then copy argv into it as a UTF-8 slice. Slice copy expressions like this one are a type-safe and memory-safe way to memcpy in Hare. Then we do something a bit more interesting.

Like slices, strings have an internal representation in Hare which includes a data pointer, length, and capacity. The types module provides a struct with this representation so that you can do low-level string manipulation in Hare should the task call for it. Hare’s syntax allows us to take the address of a literal value, such as a types::string struct, using the & operator. Then we cast it to a pointer to a string and dereference it. Ta-da! We set the bootinfo argv field to a str value which uses the user address of the argument vector.

Some use-cases call for this level of fine control over the precise behavior of your program. Hare’s goal is to accommodate this need with little fanfare. Here we’ve drawn well outside of the lines of Hare’s safety features, but sometimes it’s useful and necessary to do so. And Hare provides us with the tools to get the safety harness back on quickly, such as we saw with the construction of the bootvec slice. This code is pretty weird but to an experienced Hare programmer (which, I must admit, the world has very few of) it should make sense.

I hope you found this interesting! I’m going back to kernel hacking. Next up is loading the userspace ELF image into its address space. I had this working before but decided to rewrite it. Wish me good luck!

A check-in on the status of Go runtime development