One thing Hare has done is allow me to unshelve several projects which were blocked pending the availability of a suitable language to write them in. I have actually been working on several of these for a while now — and several more are to come later — but I couldn’t share them thanks to Hare’s policy of secrecy early in its development. Allow me to introduce you to a few projects!

Helios is a micro-kernel for x86_64, and ideally later for aarch64 and riscv64 as well (and possibly other targets as Hare grows additional ports). We have a few things working, such as paging and interrupts, and as of this morning we have entered userspace. Next up is rigging up syscalls and scheduling, then we’re going to start fleshing out an L4-inspired API and writing some drivers in userspace. 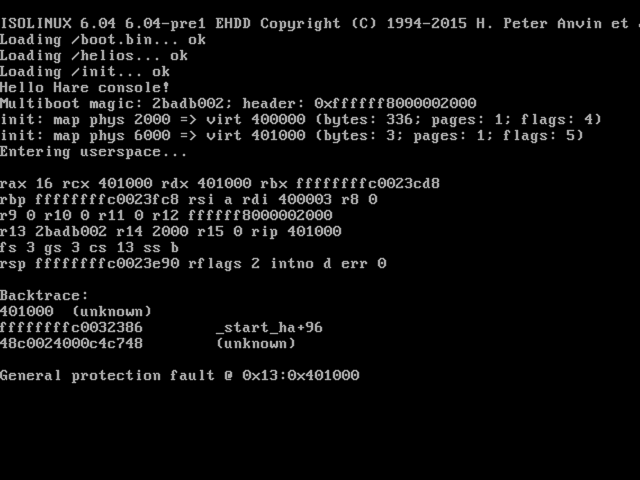 Himitsu is a secret storage system. It can act as a password manager, but it also stores other arbitrary secret data, such as private keys. Each key is a set of key/value pairs, some of which can be secret. This allows you to store additional data alongside your password (such as your username or email for login), and also supports secret data other than passwords — like SSH keys. An extensible consent and agent protocols allow you to expand it to support a wide variety of use-cases for secure use of secrets.

btqd, or “bittorrent queue daemon”, is (going to be) a bittorrent daemon, but it is still very early in development. The design is essentially that of a process supervisor which manages a queue of torrents and fires up subprocesses to seed or leech for a set of active torrents. Each subprocess, such as btlc (bittorrent leech client), or btsc (bittorrent seed client), can also be used separately from the queue daemon. Further development is blocked on net::http, which is blocked on TLS support, for tracker announce requests. I may temporarily unblock this by shelling out to curl instead.

scheduled is also early in development. It is a replacement for crond (and also at(1)) which is redesigned from the ground up. I have never been thrilled with cron’s design — it’s very un-Unix like. scheduled will have better error handling and logging, a much more flexible and understandable approach to configuration, and a better approach to security, plus the ability to do ad-hoc scheduling from the command line. This was designed prior to date/time support landing in Hare, and was blocked for a while, but is now unblocked. However, it is not my highest priority.

Each of these projects will spawn more blog posts (or talks) going into greater depth on their design goals and rationale later on. For now, with the introductions out of the way, allow me to fill you in on the things which got done in this past month in particular.

I’ll keep the SourceHut news short, and expand upon it in the “what’s cooking” post later today. For my own part, I spent some time working on hut to add support for comprehensive account data import/export. This will allow you to easily take all of your data out of sourcehut and import it into another instance, or any compatible software — your git repos are just git repos and your mailing lists are just mbox files, so you could push them to GitHub or import them into GNU Mailman, for example. This work is also a step towards self-service account deletion and renaming, both prioritized for the beta.

Regarding Hare itself, there are many important recent developments. Over 300 commits landed this month, so I’ll have to leave some details out. An OpenBSD port is underway by Brian Callahan, and the initial patches have landed for the Hare compiler. The crypto module grew blowfish and bcrypt support, both useful mainly for legacy compatibility, as well as the more immediately useful x25519 and pem implementations. There is also a new encoding::json module,1 and a number of fixes and improvements have been steadily flowing in for regex, bufio, net, net::uri, and datetime, along with dozens of others.

For Himitsu, I developed hare-ssh this month to facilitate the addition of himitsu-ssh, which provides SSH tooling that integrates with Himitsu (check out the video above for a demo). The “hissh-import” command decodes OpenSSH private keys and loads them into the Himitsu keystore, and the “hissh-agent” command runs an SSH agent that performs authentication with the private keys stored in Himitsu. Future additions will include “hissh-export”, for getting your private keys back out in a useful format, and “hissh-keygen”, for skipping the import/export step entirely. Presently only ed25519 keys are supported; more will be added as the necessary primitives are added to Hare upstream.

I did some work on Helios this weekend, following a brief hiatus. I wrote a more generalized page table implementation which can manage multiple page tables (necessary to have separate address spaces for each process), and started rigging up the kernel to userspace transition, which I briefly covered earlier in the post. As of this morning, I have some code running in userspace — one variant attempts to cli, causing a general protection fault (as expected), and another just runs a busy loop, which works without any faults. Next steps are syscalls and scheduling.

That’s all the news for today. Hare! Woo! Thanks for reading, and be sure to check out — and maybe contribute to? — some of these projects. Take care!