Happy New Year! I had a lovely time in Amsterdam. No one had prepared me for the (apparently infamous) fireworks culture of the Netherlands. I thought it was really cool.

Our programming language continues to improve apace. Our cryptography suite now includes Argon2, Salsa20/XSalsa20, ChaCha20/XChaCha20, and Poly1305, and based on these functions we have added libsodium-style high-level cryptographic utilities for AEAD and key derivation, with stream encryption, message signing and verification, and key exchange coming soon. We have also laid out the priorities for future crypto work towards supporting TLS, and on the way we expect to have ed25519/x25519 and Diffie-Hellman added soon. Perhaps enough to implement an SSH client?

I also implemented an efficient path manipulation module for the standard library (something I would really have liked to have in C!), and progress continues on date/time support. We also have a new MIME module (just for Media Types, not all of MIME) and I expect a patch implementing net::uri to arrive in my inbox soon. I also finished up cmsg support (for sendmsg and recvmsg), which is necessary for the Wayland implementation I’m working on (and was a major pain in the ass). I spent some time working with another collaborator, who is developing a RISC-V kernel in our language, implementing a serial driver for the SiFive UART, plus improving the device tree loader and UEFI support.

One of the standard library contributors also wrote a side-project to implement Ray Tracing in One Weekend in our language: 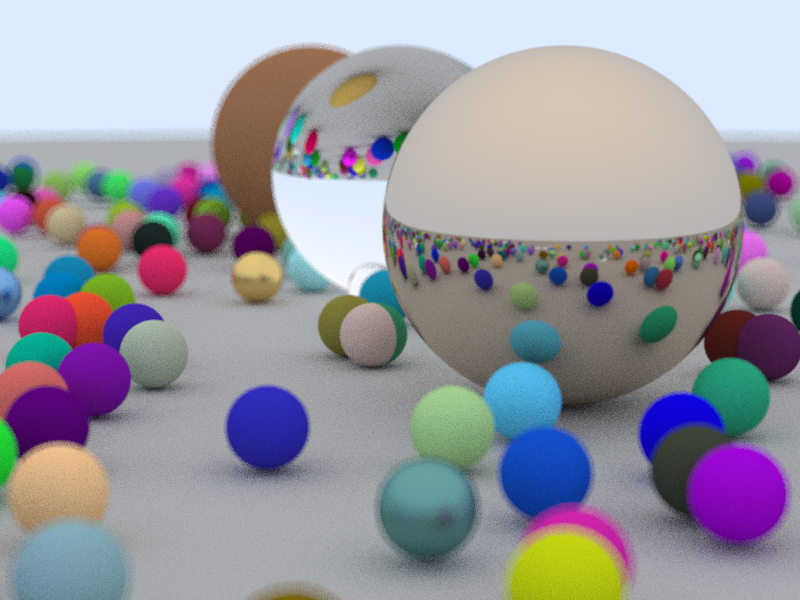 In other words, language development has been very busy in the past few weeks. Another note: I have prepared a lightning talk for FOSDEM which talks about the backend that we’re using: qbe. Check it out!

In SourceHut news, we have brought on a new full-time contributor, Adnan Maolood, thanks to a generous grant from NLNet. We also have another full-time software engineer starting on February 1st (on our own dime), so I’m very much looking forward to that. Adnan will be helping us with the GraphQL work, and the new engineer will be working similarly to Simon and I on FOSS projects generally (and, hopefully, with GraphQL et al as well). Speaking of GraphQL, I’m putting the finishing touches on the todo.sr.ht writable API this week: legacy webhooks. These are nearly done, and following this we need to do the security review and acceptance testing, then we can ship. Adnan has been hard at work on adding GraphQL-native webhooks to git.sr.ht, which should also ship pretty soon.

That’s all for today. Thanks for reading! I’ll see you again in another month.