I’m writing to you from a Sway session on Alpine Linux, which is to say from a setup quite similar to the one I usually write blog posts on, save for one important factor: a RISC-V CPU.

I’ll state upfront that what I’m using is not a very practical system. What I’m going to describe is all of the impractical hacks and workarounds I have used to build a “useful” RISC-V system on which I can mostly conduct my usual work. It has been an interesting exercise, and it bodes well for the future of RISC-V, but for all practical purposes the promise of RISC-V still lives in tomorrow, not today.

In December of 2018, I wrote an article about the process of bootstrapping Alpine Linux for RISC-V on the HiFive Unleashed board. This board was essentially a crappy SoC built around a RISC-V CPU: a microSD slot, GPIO pins, an ethernet port, a little bit of RAM, and the CPU itself, in a custom form-factor.1 Today I’m writing this on the HiFive Unmatched, which is a big step up: it’s a Mini-ITX form factor (that is, it fits in a standardized PC case) with 16G of RAM, and the ethernet, microSD, and GPIO ports are complemented with a very useful set of additional I/O via two M.2 slots, a PCIe slot, and a USB 3 controller, plus an SPI flash chip. I have an NVMe drive with my root filesystem on it and an AMD Radeon Pro WX 2100 GPU installed. In form, it essentially functions like a standard PC workstation.

I have been gradually working on bringing this system up to the standards that I expect from a useful PC, namely that it can run upstream Alpine Linux with minimal fuss. This was not really possible on the previous SiFive hardware, but I have got pretty close on this machine. I had to go to some lengths to get u-Boot to provide a working UEFI environment,2 and I had to patch grub as well, but the result is that I can write a standard Alpine ISO to a USB stick, then boot it and install Alpine onto an NVMe normally, which then boots itself with UEFI with no further fiddling. I interact with it through three means: the on-board UART via a micro-USB cable (necessary to interact with u-Boot, grub, or the early Linux environment), or ethernet (once sshd is up), or with keyboard, mouse, and displays connected to the GPU.

Another of the standards I expect is that everything runs with upstream free software, perhaps with a few patches, but not from a downstream or proprietary tree. I’m pleased to report that I am running an unpatched mainline Linux 5.15.13 build. I am running mainline u-Boot with one patch to correct the name of a device tree node to match a change in Linux upstream. I have a patched grub build, but the relevant patches have been proposed for grub upstream. I have a spattering of patches applied to a small handful of userspace programs and libraries, but all of them only call for one or two patches applied to the upstream trees. Overall, this is quite good for something this bleeding edge — my Pinephone build is worse.

I have enclosed the system in a mini-ITX case and set it down on top of my usual x86_64 workstation, then moved a few of my peripherals and displays over to it to use it as my workstation for the day.3 I was able to successfully set up almost all of my standard workstation loadout on it, with some notable exceptions. Firefox is the most painful omission — bootstrapping Rust is an utter nightmare4 and no one has managed to do it for Alpine Linux riscv64 yet (despite many attempts and lots of hours wasted), so anything which depends on it does not work. librsvg is problematic for the same reason; I had to patch a number of things to be configured without it. For web browsing I am using visurf, which is based on Netsurf, and which works for many of the lightweight websites that I generally prefer to use, but not for most others. For instance, I was unable to address an issue that was raised on GitLab today because I cannot render GitLab properly on this browser. SourceHut mostly works, of course, but it’s not exactly pleasant — I still haven’t found time to improve the SourceHut UI for NetSurf. 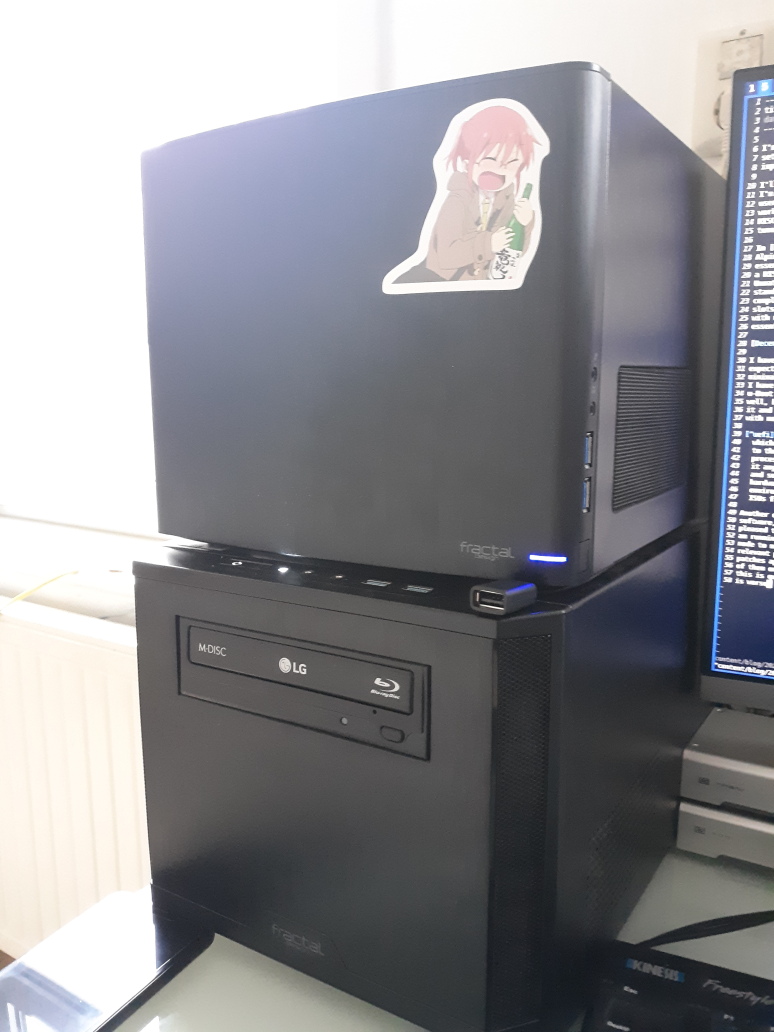 The lower computer is my typical x86_64 workstation, and the upper computer is the RISC-V machine. The USB ports on the side are not connected to the board, so I pulled a USB extension cord around from the back. This is mainly useful for rapid iteration when working on a RISC-V kernel that a colleague has been developing using our new programming language. I can probably get netboot working later, but this works for now.

Complicating things is the fact that my ordinary workstation uses two 4K displays. For example, my terminal emulator of choice is foot, but it uses CPU rendering and the 4K window is noticeably sluggish. Alacritty, which renders on the GPU, would probably fare better — but Rust spoils this again. I settled for st, which has acceptable performance (perhaps in no small part thanks to being upscaled from 1080p on this setup). visurf also renders on the CPU and is annoyingly slow; as a workaround I have taken to resizing the window to be much smaller while actively navigating and then scaling it back up to full size to read the final page.

CPU-bound programs can be a struggle. However, this system has a consumer workstation GPU plugged into its PCIe slot. Any time I can get the GPU to pick up the slack, it works surprisingly effectively. For example, I watched Dune (2021) today in 4K on this machine — buttery smooth, stunningly beautiful 4K playback — a feat that my Pinebook Pro couldn’t dream of. The GPU has a hardware HEVC decoder, and mpv and Sway can use dmabufs such that the GPU decodes and displays each frame without it ever having to touch the CPU, and meanwhile the NVMe is fast enough to feed it data at a suitable bandwidth. A carefully configured obs-studio is also able to record my 4K display at 30 FPS and encode it on the GPU with VAAPI with no lag, something that I can’t even do on-CPU on x86_64 very reliably. The board does not provide onboard audio, but being an audiophile I have a USB DAC available that works just fine.

I was able to play Armagetron Advanced at 120+ FPS in 4K, but that’s not exactly a demanding game. I also played SuperTuxKart, a more demanding game, at 1080p with all of the settings maxed out at a stable 30 FPS. I cannot test any commercial games, since I’m reasonably certain that there are no proprietary games that distribute a riscv64 build for Linux. If Ethan Lee is reading this, please get in touch so that we can work together on testing out a Celeste build.

My ordinary workday needs are mostly met on this system. For communication, my mail setup with aerc and postfix works just fine, and my normal Weechat setup works great for IRC.5 Much like any other day, I reviewed a few patches and spent some time working on a shell I’ve been writing in our new programming language. The new language is quite performant, so no issues there. I think if I had to work on SourceHut today, it might be less pleasant to work with Python and Go, or to work on the web UI without a performant web browser. Naturally, browsing Geminispace with gmnlm works great.

So, where does this leave us? I have unusually conservative demands of my computers. Even on high-end, top-of-the-line systems, I run a very lightweight environment, and that’s the way I like it. Even so, my modest demands stress the limits of this machine. If I relied more on a web browser, or on more GUI applications, or used a heavier desktop environment, or heavier programming environments, I would not be able to be productive on this system. Tomorrow, I expect to return to my x86_64 machine as my daily workstation and continue to use this machine as I have before, for RISC-V development and testing over serial and SSH. There are few use-cases for which this hardware, given its limitations, is adequate.

Even so, this is a very interesting system. The ability to incorporate more powerful components like DDR4 RAM, PCIe GPUs, NVMe storage, and so on, can make up for the slow CPU in many applications. Though many use-cases for this system must be explained under strict caveats, one use-case it certainly offers is a remarkably useful system with which to advance the development of the RISC-V FOSS ecosystem. I’m using it to work on Alpine Linux, on kernel hacking projects, compiler development, and more, on a CPU that is designed in adherence to an open ISA standard and runs on open source firmware. This is a fascinating product that promises great things for the future of RISC-V as a platform.