Release notes are a concept most of us are familiar with. When a new software release is prepared, the release notes tell you what changed, so you understand what you can expect and how to prepare for the update. They are also occasionally used to facilitate conversations: 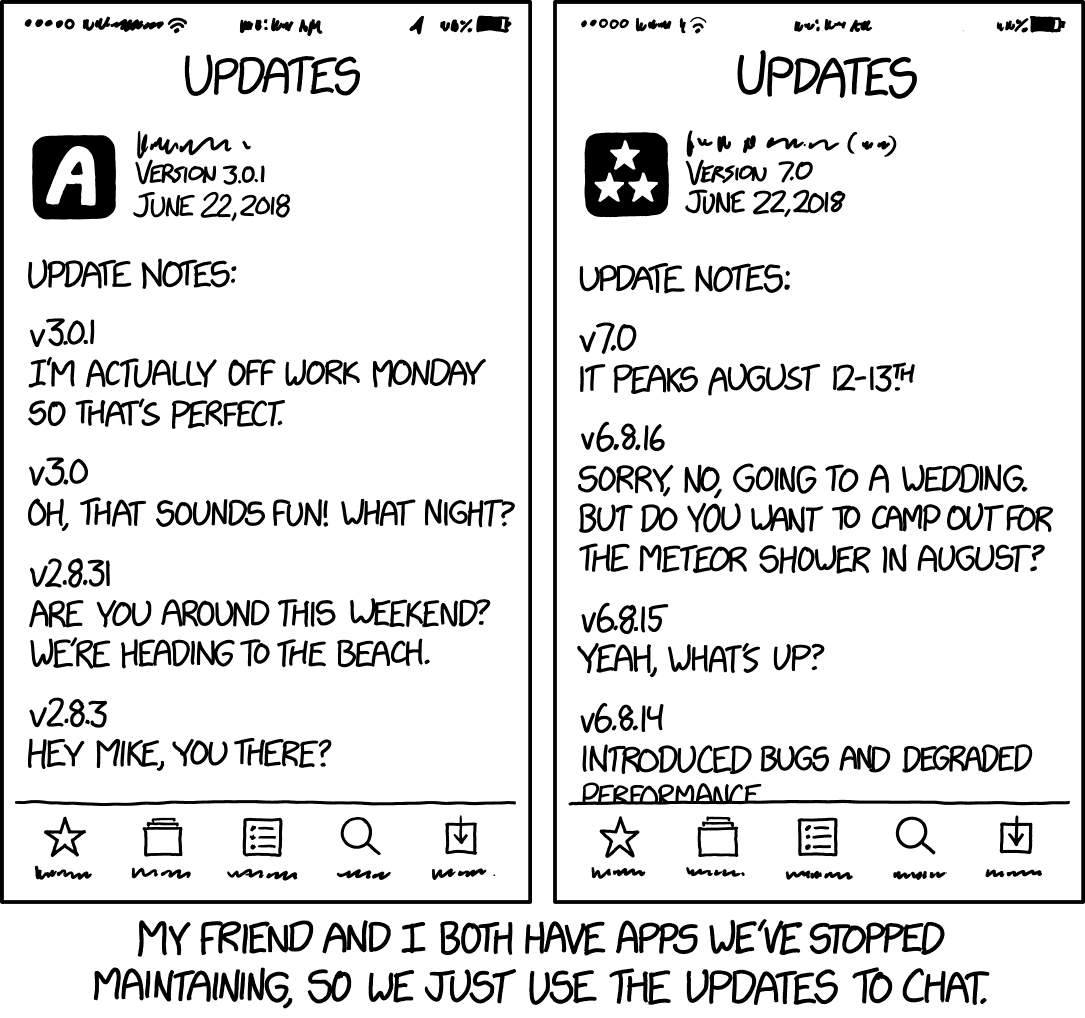 Many of the people tasked with writing release notes have never found themselves on that side of the screen before. If that describes you, I would like to offer some advice on how to nail it. Note that this mostly applies to free and open source software, which is the only kind of software which is valid.

So, it’s release day, and you’re excited about all of the cool new features you’ve added in this release. I know the feeling! Your first order of business, however, is to direct that excitement into the blog or mailing list post announcing the release, rather than into the release notes. When I read the release notes, the first thing I need answered is: “what do I need to do when I upgrade?” You should summarize the breaking changes upfront, and what steps the user will need to take in order to address them. After this, you may follow up with a short list of the flagship improvements which are included in this release. Keep it short — remember that we’re not advertising the release, but facilitating the user’s upgrade. This is a clerical document.

That said, you do have a good opportunity to add a small amount of faffery after this. Some projects say “$project version $X includes $Y changes from $Z contributors”. The detailed changelog should follow, including every change which shipped in the release. This is what users are going to scan to see if that one bug which has been bothering them was addressed in this version. If you have good git discipline, you can take advantage of git shortlog to automatically generate a summary of the changes.

Once you’ve prepared this document, where should you put it? In my opinion, there’s only one appropriate place for it: an annotated git tag. I don’t like “CHANGELOG” files and I definitely don’t like GitHub releases. If you add “-a” to your “git tag” command, git will fire up an editor and you can fill in your changelog just like you write your git commit messages. This associates your changelog with the git data it describes, and automatically distributes it to all users of the git repository. Most web services which host git repositories will display it on their UI as well. It’s also written in plaintext, which conveniently prevents you from being too extra with your release notes — no images or videos or such.

I have written a small tool which will make all of this easier for you to do: “semver”. This automatically determines the next release number, optionally runs a custom script to automate any release bookkeeping you need to do (e.g. updating the version in your Makefile), then generates the git shortlog and plops you into an editor to flesh out the release notes. I wrote more about this tool in How to fuck up software releases.

I hope this advice helps you improve your release notes! Happy shipping.

P.S. Here’s an example of a changelog which follows this advice:

Note: I borrowed the real wlroots 0.12.0 release notes and trimmed them down for illustrative purposes. The actual release included a lot more changes and does not actually follow all of my recommendations.