Parsers all the way down: writing a self-hosting parser April 22, 2021 on Drew DeVault's blog

This is the third parser which has been implemented for this language. We wrote a sacrificial compiler prototype upfront to help inform the language design, and that first compiler used yacc for its parser. Using yacc was helpful at first because it makes it reasonably simple to iterate on the parser when the language is still undergoing frequent and far-reaching design changes. Another nice side-effect starting with a yacc parser is that it makes it quite easy to produce a formal grammar when you settle on the design. Here’s a peek at some of our original parser code:

This approach has you writing code which is already almost a formal grammar in its own right. If we strip out the C code, we get the following:

This gives us a reasonably clean path to writing a formal grammar (and specification) for the language, which is what we did next. 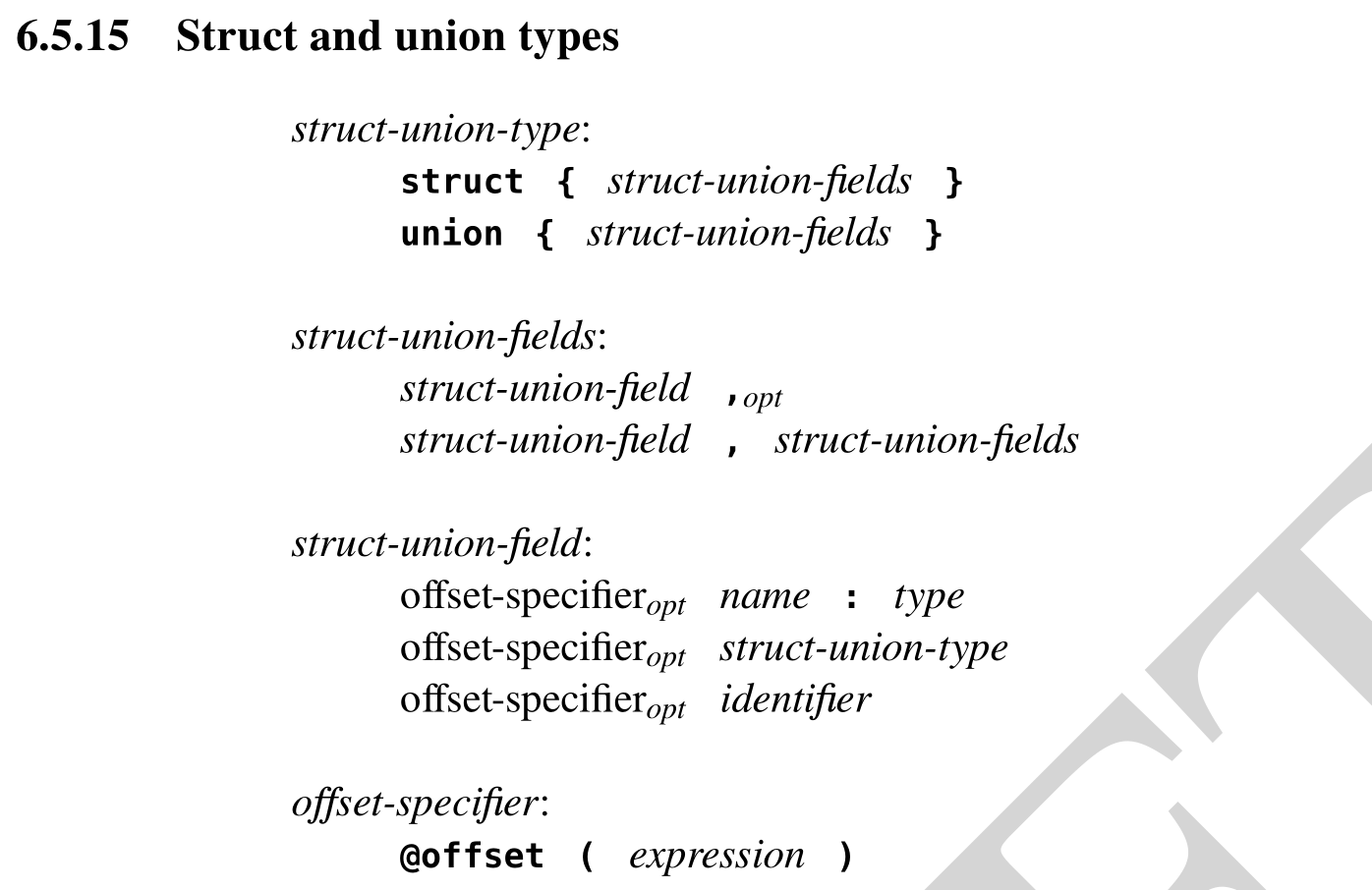 All of these samples describe a struct type. The following example shows what this grammar looks like in real code — starting from the word “struct” and including up to the “}” at the end.

In order to feed our parser tokens to work with, we also need a lexer, or a lexical analyzer. This turns a series of characters like “struct” into a single token, like the T_STRUCT we used in the yacc code. Like the original compiler used yacc as a parser generator, we also used lex as a lexer generator. It’s simply a list of regexes and the names of the tokens that match those regexes, plus a little bit of extra code to do things like turning “1234” into an int with a value of 1234. Our lexer also kept track of line and column numbers as it consumed characters from input files.

After we settled on the design with our prototype compiler, which was able to compile some simple test programs to give us a feel for our language design, we set it aside and wrote the specification, and, alongside it, a second compiler. This new compiler was written in C — the language was not ready to self-host yet — and uses a hand-written recursive descent parser.

To simplify the parser, we deliberately designed a context-free LL(1) grammar, which means it (a) can parse an input unambiguously without needing additional context, and (b) only requires one token of look-ahead. This makes our parser design a lot simpler, which was a deliberate goal of the language design. Our hand-rolled lexer is slightly more complicated: it requires two characters of lookahead to distinguish between the “.”, “..”, and “…” tokens.

I’ll skip going in depth on the design of the second parser, because the hosted parser is more interesting, and a pretty similar design anyway. Let’s start by taking a look at our hosted lexer. Our lexer is initialized with an input source (e.g. a file) from which it can read a stream of characters. Then, each time we need a token, we’ll ask it to read the next one out. It will read as many characters as it needs to unambiguously identify the next token, then hand it up to the caller.

Our specification provides some information to guide the lexer design:

A token is the smallest unit of meaning in the **** grammar. The lexical analysis phase processes a UTF-8 source file to produce a stream of tokens by matching the terminals with the input text.

Tokens may be separated by white-space characters, which are defined as the Unicode code-points U+0009 (horizontal tabulation), U+000A (line feed), and U+0020 (space). Any number of whitespace characters may be inserted between tokens, either to disambiguate from subsequent tokens, or for aesthetic purposes. This whitespace is discarded during the lexical analysis phase.

The lexical analysis process consumes Unicode characters from the source file input until it is exhausted, performing the following steps in order: it shall consume and discard white-space characters until a non-white-space character is found, then consume the longest sequence of characters which could constitute a token, and emit it to the token stream.

There are a few different kinds of tokens our lexer is going to need to handle: operators, like “+” and “-"; keywords, like “struct” and “return”; user-defined identifiers, like variable names; and constants, like string and numeric literals.

In short, given the following source code:

We need to return the following sequence of tokens:

This way, our parser doesn’t have to deal with whitespace, or distinguishing “int” (keyword) from “integer” (identifier), or handling invalid tokens like “$”. To actually implement this behavior, we’ll start with an initialization function which populates a state structure.

The main entry point for doing the actual lexing will look like this:

The idea is that when the caller needs another token, they will call lex, and receive either a token or an error. The purpose of our lex function is to read out the next character and decide what kind of tokens it might be the start of, and dispatch to more specific lexing functions to handle each case.

Aside from the EOF case, and simple single-character operators like “;”, both of which this function handles itself, its role is to dispatch work to various sub-lexers.

The sub-lexers handle more specific cases. The lex_name function handles things which look like identifiers, including keywords; the lex_literal function handles things which look like literals (e.g. “1234”); lex_rn_str handles rune and string literals (e.g. “hello world” and ‘\n’); and lex2 and lex3 respectively handle two- and three-character operators like “&&” and “>>=”.

lex_name is the most complicated of these. Because the only thing which distinguishes a keyword from an identifier is that the former matches a specific list of strings, we start by reading a “name” into a buffer, then binary searching against a list of known keywords to see if it matches something there. To facilitate this, “bmap” is a pre-sorted array of keyword names.

The rest of the code is more of the same, but I’ve put it up here if you want to read it.

Let’s move on to parsing: we need to turn this one dimensional stream of tokens into an structured form: the Abstract Syntax Tree. Consider the following sample code:

But what we need is something more structured, like this:

We know at each step what kinds of tokens are valid in each situation. After we see “let”, we know that we’re parsing a binding, so we look for a name (“x”) and a colon token, a type for the variable, an equals sign, and an expression which initializes it. To parse the initializer, we see an identifier, “add2”, then an open parenthesis, so we know we’re in a call expression, and we can start parsing arguments.

To make our parser code expressive, and to handle errors neatly, we’re going to implement a few helper function that lets us describe these states in terms of what the parser wants from the lexer. We have a few functions to accomplish this:

Let’s say we’re looking for a binding like our sample code to show up next. The grammar from the spec is as follows: 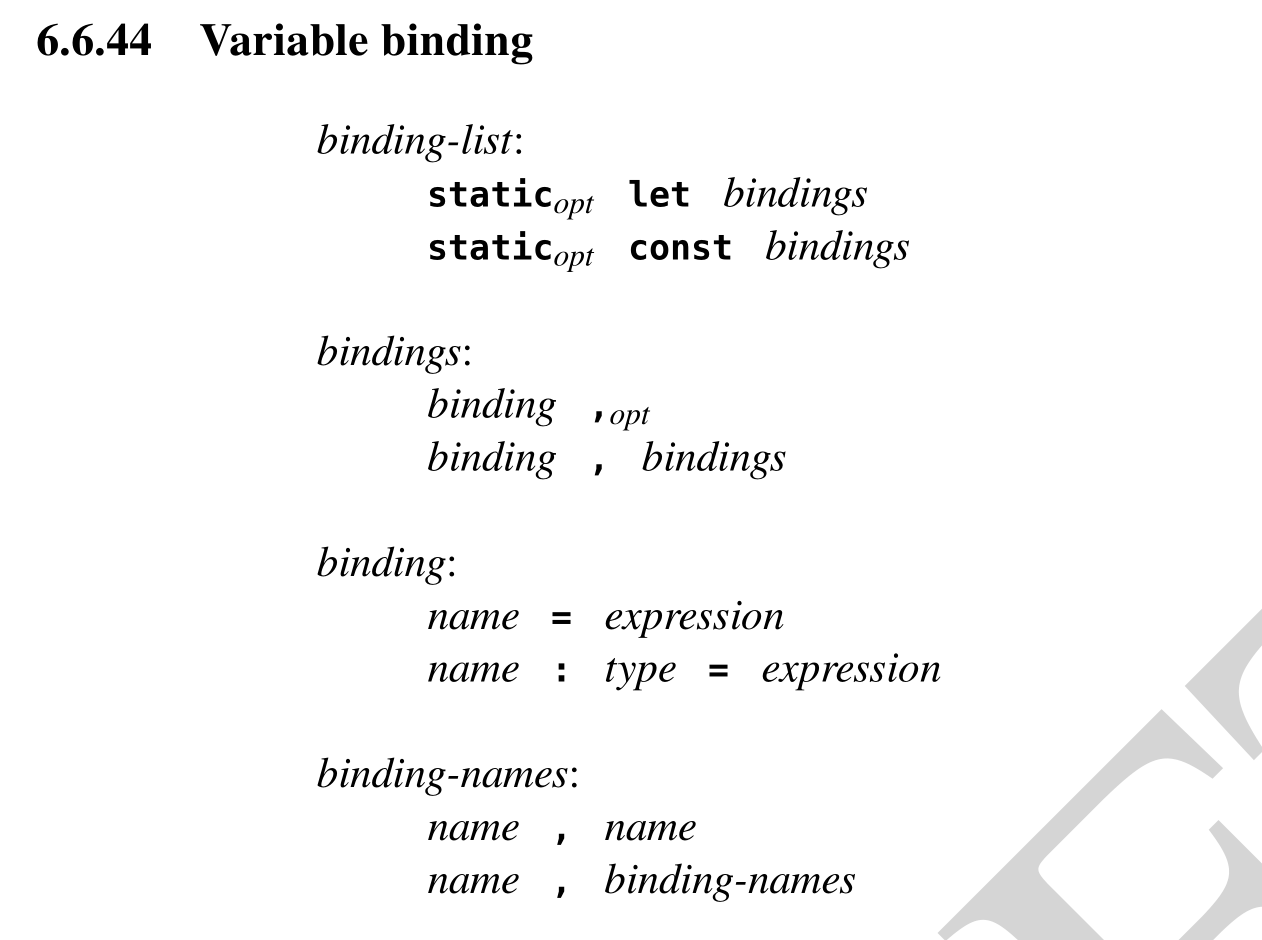 And here’s the code that parses that:

Hopefully the flow of this code is fairly apparent. The goal is to fill in the following AST structure:

The rest of the code is pretty similar, though some corners of the grammar are a bit hairier than others. One example is how we parse infix operators for binary arithmetic expressions (such as “2 + 2”):

I don’t really grok this algorithm, to be honest, but hey, it works. Whenever I write a precedence climbing parser, I’ll stare at the Wikipedia page for 15 minutes, quickly write a parser, and then immediately forget how it works. Maybe I’ll write a blog post about it someday.

Anyway, ultimately, this code lives in our standard library and is used for several things, including our (early in development) self-hosted compiler. Here’s an example of its usage, taken from our documentation generator:

Where the “ast::subunit” type is:

Pretty straightforward! Having this as part of the standard library should make it much easier for users to build language-aware tooling with the language itself. We also plan on having our type checker in the stdlib as well. This is something that I drew inspiration for from Golang — having a lot of their toolchain components in the standard library makes it really easy to write Go-aware tools.

So, there you have it: the next stage in the development of our language. I hope you’re looking forward to it!

⇒ This article is also available on gemini.

Hello and happy new year! After a bit of well-deserved rest during the holidays, our staff (and many of our contributors) have spun our work streams back up and development continues. Our userbase has grown this month by another 634 users, bringing the total…

Hi all! This month’s status update will be quite shorter than usual, because I’ve been taking two weeks off. I’ve been in Strasbourg (a city in the east of France) for New Year’s Eve. We’ve cooked a bunch of local food, including a Kougelhopf: But let’s get b…

Two new tutorials have been published in preparation for the release of Go 1.18.