In my workflow, I use Vim as my editor, and Unix as my “IDE”. I don’t trick out my vimrc to add a bunch of IDE-like features — the most substantial plugin I use on a daily basis is Ctrl+P, and that just makes it easier to open files. Being Vim literate is a valuable skill, but an important detail is knowing when to drop it. My daily workflow involves several open terminals, generally one with Vim, another to run builds or daemons, and a third which just keeps a shell handy for anything I might ask of it. 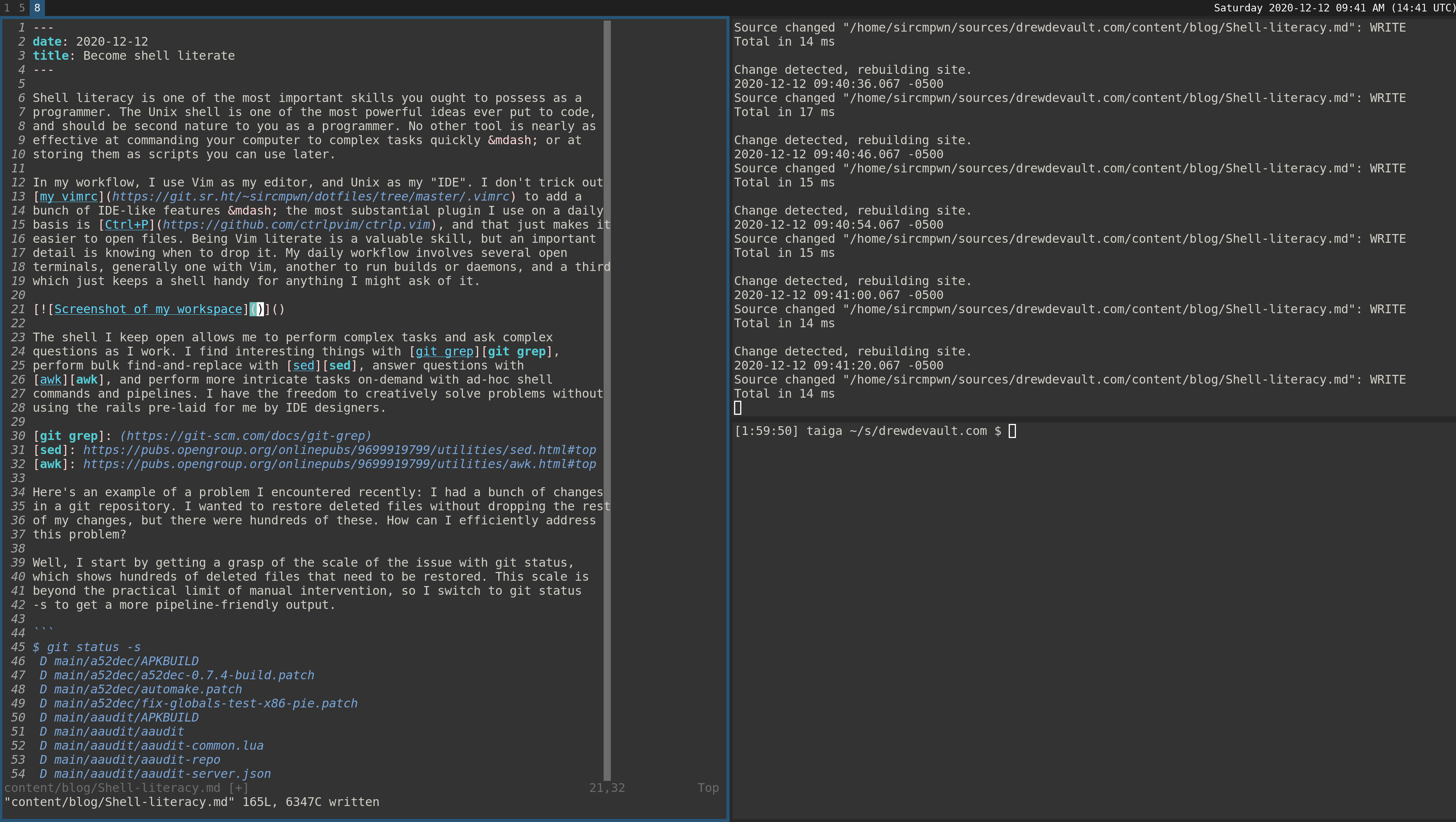 The shell I keep open allows me to perform complex tasks and answer complex questions as I work. I find interesting things with git grep, perform bulk find-and-replace with sed, answer questions with awk, and perform more intricate tasks on-demand with ad-hoc shell commands and pipelines. I have the freedom to creatively solve problems without being constrained to the rails laid by IDE designers.

Here’s an example of a problem I encountered recently: I had a bunch of changes in a git repository. I wanted to restore deleted files without dropping the rest of my changes, but there were hundreds of these. How can I efficiently address this problem?

Well, I start by getting a grasp of the scale of the issue with git status, which shows hundreds of deleted files that need to be restored. This scale is beyond the practical limit of manual intervention, so I switch to git status -s to get a more pipeline-friendly output.

I can work with this. I add grep '^ D' to filter out any entries which were not deleted, and pipe it through awk '{ print $2 }' to extract just the filenames. I’ll often run the incomplete pipeline just to check my work and catch my bearings:

Very good — we have produced a list of files which we need to address. Note that, in retrospect, I could have dropped the grep and just used awk to the same effect:

However, we’re just writing an ad-hoc command here to solve a specific, temporary problem — finesse is not important. This command isn’t going to be subjected to a code review. Often my thinking in these situations is to solve one problem at a time: “filter the list” and “reword the list”. Anyway, the last step is to actually use this list of files to address the issue, with the help of xargs.

This command, written in the moment, finds, characterizes, filters, and sorts my shell history by command complexity. Here are a couple of the cool shell commands I found:

Play the 50 newest videos in a directory with mpv:

I use this command all the time. If I want to watch a video later, I will touch the file so it appears at the top of this list. Another command transmits a tarball of a patched version of Celeste to a friend using netcat, minus the (large) game assets, with a progress display via pv:

And on my friend’s end:

tar, by the way, is an under-rated tool for moving multiple files through a pipeline. It can read and write tarballs to stdin and stdout!

I hope that this has given you a tantalizing taste of the power of the Unix shell. If you want to learn more about the shell, I can recommend shellhaters.org as a great jumping-off point into various shell-related parts of the POSIX specification. Don’t be afraid of the spec — it’s concise, comprehensive, comprehensible, and full of examples. I would also definitely recommend taking some time to learn awk in particular: here’s a brief tutorial.